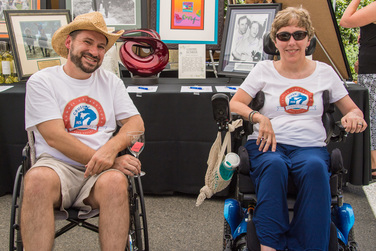 Crush MS Founders Julie Hare and Kevin Reid
﻿Reid Family Vineyards﻿ and Counter Punch Wines have teamed up to create an organization called Crush MS, which brings wineries together to raise funds and awareness toward a world free of Multiple Sclerosis.

Julie Hare was diagnosed with Multiple Sclerosis in 2009. Her husband Stephen had spent his adult life in the California wine industry and had always yearned to start his own wine label. In 2012 they started Counter Punch Wines with the mutual goals of producing small lots of hand-made wines from California’s best vineyards while generating funds that would allow them to give something back to organizations that help “counter punch” the effects of MS.

Reid Family Vineyards was founded by Kirk and Karen Reid in 1992 with the planting of a small Napa Valley estate vineyard in the foothills of Mt. Veeder. Their oldest son Kevin was diagnosed with Multiple Sclerosis in 2002. Kevin met Julie through a local author with MS and the two families agreed to come together and use their mutual love of wine to promote awareness of this debilitating disease and raise funds for research toward a cure. Together, they created the idea of Crush MS – an organization which brings people together with some of the greatest wines available, all for a great cause.


Multiple sclerosis (MS) involves an immune-mediated process in which an abnormal response of the body’s immune system is directed against the central nervous system (CNS), which is made up of the brain, spinal cord and optic nerves. The exact antigen — or target that the immune cells are sensitized to attack — remains unknown, which is why MS is considered by many experts to be "immune-mediated" rather than "autoimmune."

Learn more about MS via the National Multiple Sclerosis Society